Home / The must-sees / The most beautiful villages / Cardaillac... the most striking
-A +A

Designated « one of the Most Beautiful Villages in France », Cardaillac excites the imagination

Not far from Figeac, the silhouette of Cardaillac stands proudly on its rocky spur. This village has kept all the nobility inherited from its lords.

It's all beautiful from up here

From the fort whose round and square towers have been preserved , you can make out the maze of lanes which which run between the houses roofed with sandstone. The Middle Ages raises its head, present behind each stone. However, far from resting sleepily on its ancient laurels, Cardaillac is alive and thriving, with a vigour which only its past could have bequeathed it. How ? By surfing along on the crest of the everyday activities which today are busy creating its tomorrow.

Go up to the top of the tower to see the magic view over the surrounding countryside and to understand the concept of the « musée éclaté » (multi-site museum) ! For this, you have to go into several village houses to see, in whatever order you like, a plum-drying oven, a chestnut-dryer, the old school, the clog-maker's house and workshop… 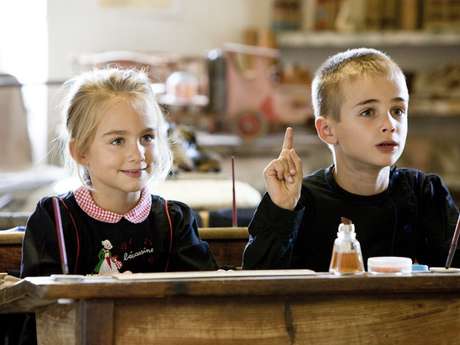